The idle air control valve plays a key role in regulating the engine speed to idle , to manage and regulate the entry of air into the combustion chambers .

The idle air control valve is an electromechanical valve controlled by the Engine Control Module (ECM), based on the inputs to the ECM : air temperature income , engine coolant temperature and air pressure mainly .

The idle air control valve is a stepper motor that controls the motion of a cone on the entry of air into the combustion chambers giving more or less air as indicated by the ECM .

When you turn on the car cold , the ECM opens the idle air control valve, allowing the entry of large amount of air for a few minutes until the engine is taking temperature and gradually closing up to normal operating temperature of a motor 82 degrees Celsius.

This initial opening makes the engine has high speed- around 1200 RPM during the heating process , then they decline to reach between 800RPM and 900RPM at idle when it has reached normal operating temperature.

The Idle Air Control Valve is located on the throttle body.

The idle air control valve is attached to the aluminum engine block by two screws as shown in the photograph below , is powered and controlled by a four-wire waterproof connector .

On the cone is commonly much soot deposited product of combustion and is causing instability and difficulty idling engine ignition is why a monthly cleaning should be done.

Regular cleaning of the IAC valve ensures a high performance engine in a variety of conditions.

Electrical diagram of the IAC valve

This is the wiring diagram of the IAC valve, as can be seen four wires coming from the ECM to control the two stepper motor windings.

Displayed colors correspond to the colors typically used for the actual electrical connection between the ECM and IAC valve cables.

A stepper motor is an electric motor that receives electrical impulses of a certain duration and frequency to control WITH GREAT ACCURACY YOUR ANGLE OF ROTATION. In other words it is possible to rotate exactly 1 degree, 6 degrees, 12 degrees, 24 degrees at each step of the motor as is designed.

When the IAC valve fails several inconvenients are produced in the motor.

If the IAC valve is dirty will be very simple to fix the problem, simply remove the IAC sensor and clean it with a clean cloth.

When the IAC valve is with mechanically failure must be unarmed, as shown in the accompanying photograph to the left, the fault is resolved by cleaning and assembling the IAC valve, then a few drops of lubricating oil applied before installing the IAC valve

But if the IAC valve fails then the idle rises and it is because it is no longer possible to control the passage of air into the combustion chambers.

Also the opposite can happen: the engine has low speed idling and solve this failure must remove the IAC, disassemble, clean and lubricate.

Power outages IAC valve may be that one or both windings of the stepper motor is shorted or open, leaving the IAC valve in one position, which can cause the engine is at low speed or accelerated, in this case is nothing more than replace the IAC valve completely.

To verify that the IAC valve has the latter fails, you can use a multimeter and verify that the windings are with the appropriate values of resistance, whose value is about 75 ohms each, if you have a value less than 10 ohms then the IAC sensor encounters a short circuit fault, whereas if the meter high resistance mark will be because the sensor IAC meets burnt or open coil.

When coal is deposited in the cone, in the spring, the shaft and the valve seat IAC motor instability occur. 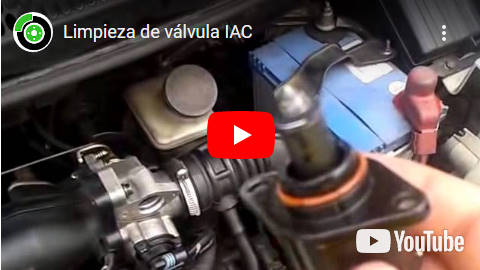 To disassemble the valve is necessary to rotate the shaft against clockwise and hold the spring pushes the cone valve IAC, in some cases having a sleeve to reduce deposits on the spring and shaft.

This video shows how you can clean the IAC Valve easely in few minutes, you must remove coal and oil with a clean wipe and then lubricate with some oil drops.

After cleaning valve IAC is necessary to perform a calibration procedure IAC valve, since the disassembly thereof, the length of the axis will be in almost any position about the right.

Therefore it is advisable to pay attention to the length of the axis of the IAC first valve is removed for cleaning.

The procedure is as follows:

How to know headlights are aligned